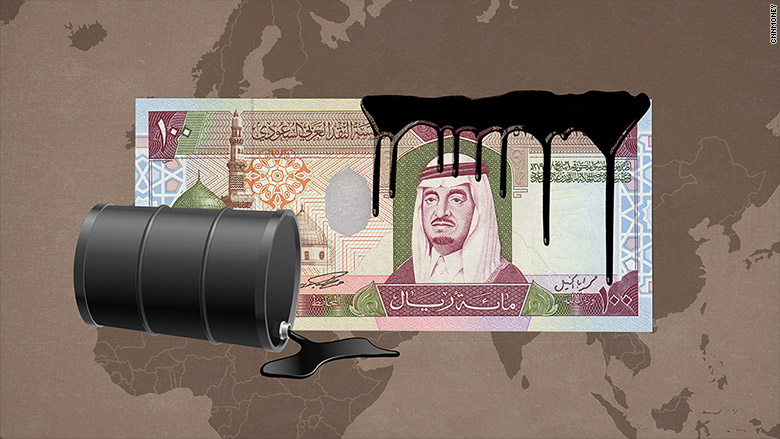 After years of raking in cash from lofty prices, oil-producing countries are getting squeezed by the crash in crude oil prices.

The cash crunch caused the OPEC leader to sell bonds over the summer to raise at least $4 billion. It was the first time Saudi Arabia tapped the bond markets in eight years.

Now there are signs Saudi Arabia is pulling out cash from global asset management firms like BlackRock (BLK).

By freeing up cash held overseas, the Saudis are shoring up its finances at home.

«The Saudis feel much more comfortable bringing liquidity home in times of crisis. They like to keep cash on hand,» said Michael Nayebi-Oskoui, Middle East and South Asia analyst at Stratfor, a geopolitical intelligence and advisory firm.

Saudi Arabia has a budget deficit

It should be no surprise that Saudi Arabia is being hurt by cheap oil. The country relies heavily on oil revenue to offset its increasing spending programs. Just like Brazil, Qatar and Russia, the crash in oil prices has made balancing the budget difficult for Saudi Arabia.

It’s a dramatic reversal of fortunes for the Saudis. Capital Economics estimates the country’s current account deficit will climb to 7.5% of gross domestic product this year. That’s compares to budget surpluses north of 20% of GDP in the past decade.

Investors around the world too are pulling money out from Middle Eastern countries that have been hurt by the prolonged slump in oil prices. After enjoying net capital inflows for years, Saudi Arabia is now grappling with significant capital outflows.

Saudis spend $77B as oil plunges

That’s why Saudi Arabia has been forced to crack open its war chest of cash.

Foreign-exchange reserves held at the Saudi Arabian Monetary Agency, the country’s central bank, have tumbled from a peak of $746 billion in the middle of 2014 to $669 billion at the end of July.

«FX reserve depletion, rather than accumulation, is the new reality for Saudi Arabia,» Jason Tuvey, Middle East economist at Capital Economics, wrote in a report this week.

All of this has dinged the Wall Street firms that have enjoyed managing huge sums of money for cash-flush Gulf countries.

Among the favorite asset managers of Middle Eastern countries are BlackRock and Franklin Templeton (BEN). Both firms declined to break out fund flows from Saudi Arabia to CNNMoney.

However, BlackRock admitted it had suffered $24 billion of net outflows from the region that includes Europe, the Middle East and Africa during the second quarter. That’s compared to inflows of $18 billion during the first quarter.

A lot of that money was being yanked due to «cash need driven by rainy-day issues,» BlackRock CEO Larry Fink told analysts in July. He didn’t name any countries in the region, but added, «It’s raining in some of the commodity-based economies.»

Saudi Arabia is also ramping up its spending at a time when oil revenue is falling.

Stratfor estimates Saudi Arabia has spent between $5 billion and $8 billion on its military conflict in Yemen, where it’s fighting against the Houthi rebels and it has also given Egypt billions of dollars in financial aid.

«As oil went up, so did their spending,» said Win Thin, global head of emerging market currency market strategy at Brown Brothers Harriman.

Too early to panic

Still, analysts believe the Saudis are well positioned to weather the storm and won’t have to devalue their currency, the riyal. That’s especially true if oil prices rebound in the coming months and years.

Unlike Qatar, Saudi Arabia still has very low levels of external debt and a strong overall balance sheet. That means it can keep borrowing money cheaply. And unlike other oil-dependent countries like Venezuela, the Saudis still have a ton of cash stockpiled.