> Inicio / Artículos / The Post-Cubicle Office and Its Discontents | Economía Personal

The Post-Cubicle Office and Its Discontents

The Post-Cubicle Office and Its Discontents

Beige partitions have given way to napping lofts, lunch gazebos and lots of open space. But are employees any happier or more productive?

I have known the inexorable sadness of pencils,’’ begins Theodore Roethke’s ‘‘Dolor,’’ the best poem in English about the grayness of the office. ‘‘All the misery of manila folders and mucilage,/Desolation in immaculate public places,/Lonely reception room, lavatory, switchboard.’’ For a century or more, office design has been our most useful metaphor for workers’ frustration. The color-sapped tedium of office life runs like a flickering current through the warrens of white-collar fiction — from Bartleby impassively facing his brick wall to Frank Wheeler caged in his dark cubicle in ‘‘Revolutionary Road.’’ The fluorescence, the screens, the fabric-wrapped plywood dividers: They’re demoralizing, humiliating. 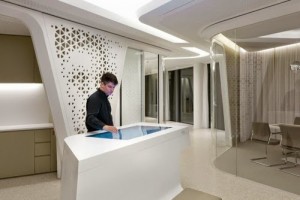 But these days, to lament cubicles is to miss the point. Looking at the most sophisticated office spaces is to see that the lessons of Roethke and Bartleby — the design lessons, at any rate — have been learned. The offices of the ad agency Hi-ReS! in Berlin, designed by the German architecture firm Studio A/S, are painted garish colors — the workplace analogue of sucking on a Gobstopper — and crammed with a variety of spaces. No one sits in little cubicles: After a conference at a yellow table, you might climb a red ladder to a small loft, snuggling up against pillows while flicking through emails or furtively napping. The headquarters for the mobile-gaming company King, maker of Candy Crush Saga, is similarly brash and childlike, its employees working among brightly colored pink and green partitions and lunching under yellow-and-white gazebos. At the highest end, big-name architects treat the office like some spacecraft landed from the future. Zaha Hadid’s plans for a research center for Saudi Aramco, the world’s largest oil company, explode the usual boxy building envelope in favor of a network of woozily distorted honeycomb cells.

Over the last century, the office has been continually improved upon, in an attempt to make it work better and be a better place to work. But the whimsy and extravagance of the contemporary office is something new. Even when they were luxurious, the early offices of the 20th century were never wacky. Frank Lloyd Wright’s Larkin Administration Building from 1906 contained a soaring central light court and recreation rooms for its largely female staff: amenities that were unheard-of at the time. But no one was encouraged to take naps; there were no secret doors leading to interior ‘‘speakeasies,’’ like the one at LinkedIn’s offices in New York. Early offices were designed to extract relentless productivity from workers. The prodigal offices of today are the logical endpoint of a decades-long backlash against this way of thinking.

The influential American management theorist Frederick Winslow Taylor was the first to apply the principles of efficiency to office design. W. H. Leffingwell, a Taylor disciple, suggested in his treatise ‘‘Scientific Office Management’’ (1917) that a poorly placed water fountain could lead to unnecessary miles being walked by an average worker — which, multiplied by many workers over 52 workweeks, might mean tens of thousands of miles of wasted steps. Taylorist offices consisted of serried rows of desks, perfectly arranged to facilitate the flow of bodies through space. It was a model of existence that, like a hectoring fitness app, reduced human beings to bundles of numbers.

Workers, unsurprisingly, hated these spaces and in the 1930s began to voice their grievances. The first strike in book publishing took place in the 1930s, and around the same time the staff of The New Republic unionized. The workers weren’t, of course, striking for better design, but it was better design that they got, along with more ‘‘caring’’ corporate policies: pensions, company picnics and, during the postwar boom, a significant and steady increase in salaries. A reaction against the factorylike office set in among planners and designers: Rather than treat its workers like machines, an office should cater to their psychology.

What followed, in the postwar decades, was the era of the glass-and-steel, air-conditioned box. Now ubiquitous and unremarkable, they were at the time considered architectural and design marvels. Descriptions of life in these companies sound conspicuously like the Googles and Facebooks of today: ‘‘Imagine a sea of blond desks with tan chairs, outdoor lighting pouring in everywhere, roomy offices with individually controlled air-conditioning and area-controlled Music by Muzak coming out of the walls.’’ That’s from Alan Harrington’s ‘‘Life in the Crystal Palace,’’ a rueful account of life in a wealthy suburban corporation in the mid-1950s. ‘‘At noon, enjoy movies in an auditorium the size of a small theater, visit the library, watch the World Series on color TV or play darts and table tennis in the game room.’’ Harrington, a quintessential and self-conscious ‘‘organization man,’’ spends a lot of time wondering whether these initiatives sap, rather than encourage, creativity. 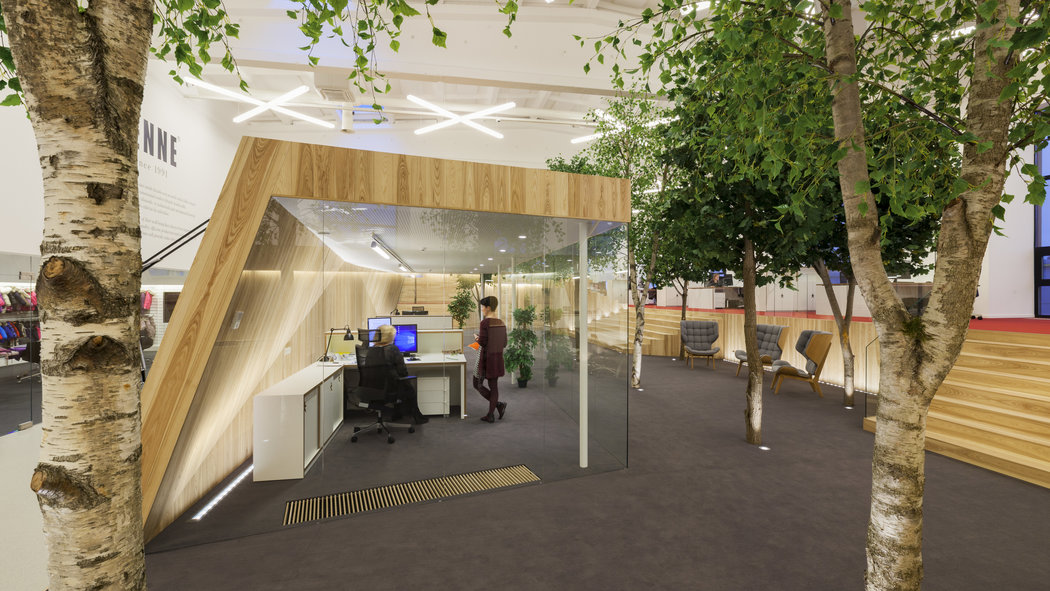 Attempts to improve the office resulted in some significant innovations, like coordinating furniture design with the architecture of a space. But there were some impressive failures, too. The most infamous was the standard cubicle: Invented by the furniture company Herman Miller in the 1960s, it quickly became a company’s favorite design tool for squeezing more people into less space for as little money as possible (until they were laid off). By the 1990s, thanks above all to the comic strip ‘‘Dilbert,’’ which debuted in 1989, it had become the classic symbol of a stymied white-collar existence — a source of the so-called cubicle rage that supposedly led to workplace shootings.

The sudden efflorescence of the tech industry in the late ’90s took us from the desert of cubicles to the milk-and-honey offices of today. Many of the dot-commers had graduated from (or, very often, dropped out of) cozy university campuses to toil in big corporations. Starting their own companies, they recreated the effortless drift between work and play that characterized their college lives. The cubicle walls came down, and in the wide, open warehouse and loft spaces they occupied, exceptionally long workdays would be punctuated by frenzied Mario Kart races or fierce Ping-Pong battles. Creating a playful office became one of the standard ways of attracting skilled employees in a competitive environment: The hope was that a talented engineer wouldn’t leave a tech behemoth for the dinky start-up next door that didn’t have a gym and a resistance pool. Thus has the ‘‘fun office’’ spread throughout the world.

Studio A/S, the German design firm, captures the zeitgeist in describing its aims: ‘‘Generation Y’’ is searching for ‘‘greater meaning’’ from office design; a new generation ‘‘wants poetry, form and atmosphere’’ in its workplaces. The design firm Teknion uses the word ‘‘ethonomics’’ to describe the principles that ought to apply to the contemporary office. The idea is that design — by softly coercing people into walking more and being more active, incorporating nature through bountiful plants and better lighting and creating environments that evoke many different textures and moods through the use of varied materials — can help foster the new ‘‘ethical workplace.’’

Office design concerned with employees’ happiness, well-being, instincts for play — this ought to be the best of all possible worlds. There is no question that such offices look vastly more inviting than your average cubicle farm; it’s not surprising that so many companies seek to emulate them. Yet the ‘‘disruptive’’ thinking that insists a workplace ought to care not just for your average needs (supplies, potable coffee, a microwave) but for your deepest psychological ones as well has its insidious side. If the new workplace technology makes it impossible to leave work at work, the ‘‘ethonomic’’ thinking behind new workplace design is intended to make it increasingly difficult to separate our work lives from everything else. The sociologist William Davies has dubbed this complex of ideas ‘‘the happiness industry,’’ wherein your most private emotions and — through the introduction of ‘‘wellness’’ programs at work — even your health are now intimate concerns of your boss. One of the most popular and cited gurus of the new workplace, Tony Hsieh, the C.E.O. of Zappos, has argued that companies ought to employ ‘‘chief happiness officers’’ to ensure enthusiasm at the office. He has also suggested that they regularly identify the 10 percent of workers who share the least enthusiasm for the ‘‘happiness agenda’’ — and fire them.

Ultimately it’s not clear whether the new offices work in the way they’re advertised. Even when common spaces are covered over in beautiful, bright plywood paneling, as with Lenne in Tallinn, Estonia, the actual desks are often in open-plan setups. The move to take people out of private offices, the better to improve collaboration and productivity, has little empirical justification. Most widely cited studies of employee satisfaction tend to run against such trends in office design. A study from The Journal of Environmental Psychology in 2013 indicated that 50 percent of workers in open-plan spaces suffer from a lack of sound privacy, and 30 percent complain about a lack of visual privacy.

In 1980, the futurologist Alvin Toffler predicted that with increases in telecommuting technology, offices would soon become irrelevant. Downtowns would be emptied, and everyone would be connected through ‘‘electronic cottages’’ dispersed throughout the countryside. Digital advances in the years since have constantly threatened to make Toffler’s fanciful vision a real one. It has come true in one sense: We do often work at home. But we also work at work, before going home to work more. Commuting and telecommuting exist in an unholy alliance. The office has persisted, becoming even bigger, weirder, stranger: a symbol of its outsize presence in our lives.

—Nikil Saval is an editor at n+1 and the author of ‘‘Cubed: A Secret History of the Workplace.’’

—Julian Faulhaber is a photographer based in Berlin. He was nominated for the 2015 Deutsche Börse Photography Foundation Prize.