Traditional Pensions: Did a Golden Age Ever Exist?

Traditional Pensions: Did a Golden Age Ever Exist? 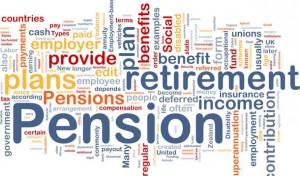 The percent of households working in the private sector with a defined benefit (DB) pension has fallen sharply in recent years, and Federal Reserve data shows that they will become nearly extinct in the years ahead. In 2010, 18.3 percent of 55- to 64-year-old households had defined-benefit pensions, but the younger age groups coming up behind them are much less likely to be covered – just 10.4 percent of households age 45-54 had a defined-benefit plan, and the numbers fall sharply from there.

That decline has eroded the amount of guaranteed lifetime income retirees can expect. But is the historic importance of DB pensions over-stated? Some argue that while DB pensions do a good job for workers who stay at a job for many years, they were never a good solution for those who shift jobs frequently.

Under ERISA, employers can require that employees have five years of service to become 100 percent vested, or longer periods with gradual vesting. Research by the Employee Benefit Research Institute (EBRI) found that median tenure for male workers age 55 to 64 topped out at 15.3 years in 1983, and slid to 10.7 years in 2012. For female workers in that age group, the figure has remained more stable, around 10 years. The implication: many workers never received much benefit from their pensions, even when they worked for companies offering them.

That strikes me as a critique of coverage – not much different than the failure of the 401(k) and IRA systems to cover more households. The 2013 Survey of Consumer Finances (SCF) from the Federal Reserve found that ownership of retirement plan accounts is falling sharply among lower-income households. In the bottom half of income distribution: 40 percent owned an IRA or 401(k) account, down from 48 percent in 2007. And the average combined IRA and 401(k) value in that income group was just $39,100 – down more than 20 percent from 2007.

Those numbers shouldn’t be surprising, in light of the huge financial pressures that make it next-to-impossible for middle class households to save for retirement: employment insecurity, soaring college costs, rising credit card balances and student loan overhang. 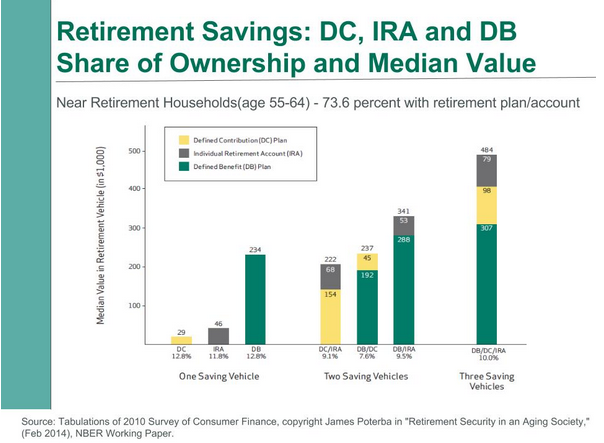 The vesting critique also masks a simple fact: for workers who have DB pensions, the retirement income they generate dwarfs the value of a 401(k) or IRA.  A study of 2010 SCF data by economist James Poterba of the Massachusetts Institute of Technology found that among near-retirement households who had a DB pension and an IRA, the pension accounts for 84 percent of projected lifetime income in retirement; for those who had a DB pension, an IRA and a 401(k), the pension accounts for 63 percent of projected income.

Along with declining pensions, we’ve got another retirement income problem: Social Security benefits are projected to replace a smaller share of income in the years ahead, mainly due to the the Social Security reforms enacted back in 1983. The reforms gradually raise the retirement age; that acts as a benefit cut, since higher retirement ages raise the bar for receiving full benefits. The 1983 reforms also introduced taxation of benefits for higher-income seniors and changes in cost-of-living adjustments.

The National Academy of Social Insurance projects that in 2015, Social Security will replace 35 percent of the median worker’s pre-retirement income at age 65 – down from 39 percent in 2002. And the replacement rate will fall further by 2030, to 31 percent.

We can talk about financial literacy and behavioral economics all day long, but neither have the firepower to overcome these huge structural barriers to restoring retirement security.

—Mark Miller is a journalist and author who writes about trends in retirement and aging. He is a columnist for Reuters and also contributes to Morningstar and the AARP magazine. Mark is the author of The Hard Times Guide to Retirement Security: Practical Strategies for Money, Work and Living. He edits RetirementRevised.com.