This ex-trader makes six figures … but lives at the beach

This ex-trader makes six figures … but lives at the beach 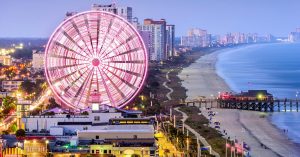 Jared Dillian wanted to break up with Corporate America while still having an open relationship with Wall Street. He had flirted with the idea of producing a stock market newsletter for years, but the timing never seemed right. Until one day — timing chose him.

On the morning of Sept. 15, 2008, he boarded his usual bus in New Jersey to take him to midtown Manhattan. He got off at Port Authority and walked the few blocks to his office. And when he arrived at 7 a.m. the building was surrounded by television cameras and reporters. He pushed past the media mob and snuck through the revolving doors. He rode the elevator up to his floor and then walked to his desk. «We just sat there,» he said. «Nobody knew what to do.»

Lehman Brothers, his employer for the last eight years, had just filed for bankruptcy.

Everyone around him thought this was a worst-case scenario, but Dillian, then the head of ETF trading, saw an opportunity for himself. Over the years he had created a cult following with his trading commentary. Every day he’d write a timely interpretation of what was happening in the markets and then send it to his clients. «The highlight of my trading days was to write about the markets. I’d just pound the keyboard whenever it hit me. I loved trading, but it was taking a massive toll on me,» Dillian said. «It was time to start something new.»

Divorcing from Corporate America can be hard. There’s a sense of stability with a salary, benefits and 401(k). It feels like a safe place. Also, depending on where you work, there’s a comradery that comes with working around like-minded people. As people get older, the capacity to take professional risks sometimes decreases. Very often you hear people say: I should have left five years ago, but it’s too late now.

«In the beginning, Dillian’s morning routine consisted of getting to his office at 7 a.m., reading the news, throwing up in a trash can next to his desk and writing for hours. He threw up every single day for three months straight.»

Dillian worked (showed up) for the entire week during Lehman’s bankruptcy. And just as he was saying goodbye to trading; Barclays picked up Lehman’s U.S. business for just $250 million. He suddenly had a job again — if he wanted. «In addition to wanting to be a writer, I just couldn’t do that job anymore,» he said. «So I quit.»

He sat down at his Lehman Brother’s computer for the last time and fired off a final note to his clients: «I’m starting a newsletter… Who wants to sign up?» And over 900 people responded «yes» to his inquiry.

It was a great start.

«I’m doing the math in my head, $600 a year times 900 clients. I can make that work. I was ready to start the Daily Dirtnap.» (A dirtnap is Old School Wall Street slang – used mostly on the West Coast. As Dillian explains on the site, it means «a disorderly collapse in price accompanied by a disappearance of liquidity, where selling accelerates and bids vanish due to fear of the presence of news.» So, for example, Lehman Brothers «took a dirtnap.»)

Just like an investment banker who merges two synergistic companies, Dillian did it with his passions: the markets and writing. He found two things he liked and seemed to be very good at and created a whole new career for himself. He was finally able to leave the corporate culture behind.

The office he rented literally had no windows. It was just a desk which cost him $1,500 a month. «It was like a solitary confinement chamber,» he said. That sounded like a financially smart way to start a business. There was just one problem: This was still mid-financial collapse.

In the beginning, Dillian’s morning routine consisted of getting to his office at 7 a.m., reading the news, throwing up in a trash can next to his desk and writing for hours. He threw up every single day for three months straight.

«I’d left a considerable amount of money on the table with a retention bonus offered by Barclays,» he said. «I’d lost at least half of my net worth in the freefalling markets and no one was signing up for my newsletter.»

But he kept on writing. He wrote about out-of-the-box ideas, trends in the market and contrarian thinking pieces. «I’m not always right,» he said. «But I always try to give you something to think about or a different way of thinking.» He focused on a type of research that wasn’t in the current market place and created a buzz. People were talking. And then word of mouth started to gain momentum. Potential clients were requesting his pieces.

Dillian’s hard work over the years has paid off. The Daily Dirtnap now has thousands of paid subscribers at $600 a pop (which, by Wall Street standards, is actually pretty cheap). He’s making a comparable living to his Wall Street trading days. His name and ideas have become part of a trading desk’s conversation. If he’s making a big call — traders want to know about it. And, he still gets to trade — but just out of his personal account — not for a full-time job.

The biggest draw for him to leave Corporate America was quality of life and he’s achieved it. «I make my own hours,» he said. «I travel. It’s great.» He’s his own boss, there’s no ceiling to his own success and he can directly enjoy the benefits of his hard work. It’s had a huge impact on his overall happiness and well-being.

«I wasn’t like, I hate this place, Lehman sucks,» he said. «I just wanted to do my own thing.»
Jared Dillian Source: Mauldin Economics
Jared Dillian

In addition to the newsletter, Dillian has also started publishing books about Wall Street. His first book was «Street Freak: Money and Madness at Lehman Brothers,» a memoir which was named Businessweek’s No. 1 general business book of 2011.

Recently he published his second book, «All the Evil of This World,» an instant underground hit. It’s fiction, but based on real events when 3Com spun off hand-held maker Palm in 2000. At the time, Dillian was working on the Pacific Coast Exchange as a floor broker’s assistant. It was one of the highest profile trades of that era. Shares of Palm climbed more than 150 percent that day before selling off sharply to end the day. While 3Com fell after climbing earlier in the day, losing nearly 22 percent of its value. The price movements caught everyone included off guard.

«I knew that day that I was going to write a book about that trade. It was insane. But it took me a whole career on Wall Street in order to be able to write it,» he said.

In addition to his own newsletter, Dillian also writes for Mauldin Economics’ «The 10th Man,» a free weekly e-letter. He’s also a Forbes contributor and a teaching associate in the graduate business program at Coastal Carolina University.

«I still have a desire to run money someday, but it’d have to be the right opportunity. My quality of life is really good. I live in Myrtle Beach. I make my own hours and I can travel. Things are really good. In order for me to lose that, it would have to be a really compelling opportunity,» Dillian said.

Most guys I know who are still in finance work extremely hard during the week so they can enjoy the weekends at the beach. I have to admit, working at the beach sounds so much better.

—Commentary by Turney Duff, a former trader at the hedge fund Galleon Group. Duff chronicled the spectacular rise and fall of his career on Wall Street in the book, «The Buy Side.» He is a commentator on CNBC’s «Filthy Rich Guide» and a consultant on the Showtime show, «Billions,» starring Damian Lewis and Paul Giamatti. Follow him on Twitter @turneyduff.

—Turney Duff chronicled the spectacular rise and fall of his career on Wall Street in the book, The Buy Side. Sony bought the TV/movie rights to the book. He is currently working on his second book, a Wall Street novel. He’s also a consultant on the upcoming Showtime show, Billions, starring Damian Lewis and Paul Giamatti. And he is featured on the CNBC show, The Filthy Rich Guide.