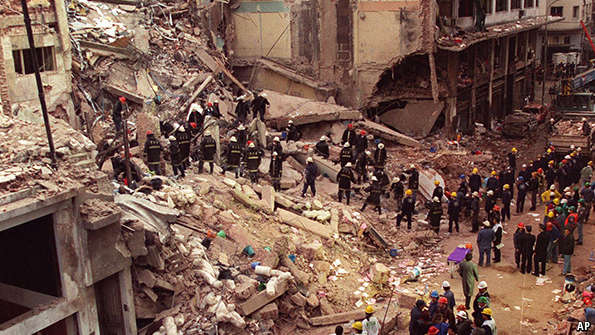 THE enemies of Argentina’s president, Cristina Fernández de Kirchner, have accused her of all sorts of transgressions during her seven years in power, from cronyism to pushing through unconstitutional laws. On January 14th a federal prosecutor leveled what may be the gravest accusation yet: that she obstructed justice in the investigation of the country’s deadliest terror attack.

In 1994, a van packed with explosives drove into AMIA, a Jewish community centre in Buenos Aires, and blew up, killing 86 people (including the terrorist) and injuring 300. No one has been tried for the massacre, but Argentine prosecutors, Jewish advocacy groups, the state of Israel and Interpol have all accused Iran of orchestrating the attack and Hizbullah, a Lebanon-based Islamist group, of executing it.

In 2013, Argentina announced that it would collaborate with Iran in a joint commission “to advance knowledge of the truth about the attack,” as Ms Fernández wrote on Twitter at the time. The country’s Jewish population, the world’s seventh largest, was puzzled and angry about the accord. Now the prosecutor, Alberto Nisman, alleges that the controversial deal was reached in back-channel negotiations that Ms Fernández initiated with Iran. He claims that she offered to cover up the involvement of any Iranian officials in exchange for increased trade. Argentina would export grain to Iran, while Iran would sell oil to Argentina to ease its severe energy deficit.

In the end, for reasons that are still unclear, the negotiations failed and the deal fell apart. But Mr Nisman has marshalled evidence of the talks in a 300-page document that he filed in a Buenos Aires court. “They decided, negotiated, and assured the impunity of the fugitive Iranians in the AMIA case with the aim of faking Iran’s innocence to serve geopolitical and commercial interests,” Mr Nisman declared. The allegations against Ms Fernández, her foreign minister, Héctor Timerman, and others are based on “irrefutable proof” from two years of investigations and myriad wiretaps, Mr Nisman claims.

This is the second time he has gone after a head of state for interfering with the investigation of the bombing. In 2009, his sleuthing led to the indictment of Carlos Menem, who was president at the time of the attack. He was accused of tampering with evidence that implicated a Syrian businessman. The case is still in progress. Mr Menem, if guilty, may have been protecting a friend. Ms Fernández’s motives—if she acted as the prosecutor alleges—appear to be more political and economic.

One of Ms Fernández’s top aides dismissed the allegations as “ridiculous”. Just what effect they will have on her and on the country’s politics more generally is hard to guess. Much depends on how effectively she refutes them. She cannot run in this year’s presidential elections, which take place in October.

Other prospective candidates are already seeking to exploit the controversy. Sergio Massa, a former ally, has called for the resignation of Mr Timerman (the son of a prominent—Jewish—opponent of Argentina’s military dictatorship), who has also denied the charges. But the main effect of the allegations may be to shake the confidence of an already cynical electorate in the integrity of the country’s governing institutions.