> Inicio / Artículos / Do you have change for a billion? | Economía Personal

Do you have change for a billion?

Do you have change for a billion? The mad world of Zimbabwe’s currency

If President Mugabe was expecting his people to welcome news that the country was to get its own currency again, he will have been sorely disappointed.

There has been a rather hostile reception from Zimbabweans to plans for new ‘bond notes’, pegged to parity with the US dollar.

For the past seven years, the country has been running entirely on foreign currency after 500 billion percent inflation led to the national dollar being abandoned. 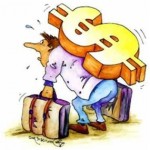 The new bond notes are an attempt to complement those foreign currencies, which are in short supply following a collapse in exports.

Despite the promise that the new notes will mirror the US dollar’s value, many are sceptical after what happened last time they trusted local currency.

Zimbabwe was once so gripped by hyperinflation that the central bank could no longer afford paper on which to print practically worthless trillion-dollar notes.

It is interesting to note that the country is now grappling with the opposite problem.

Like Britain, Japan, the US and other nations dealing with the consequences of weak demand and cheap oil, Zimbabwe is threatened more by the prospect of falling prices. But that doesn’t mean its people are ready to trust that hyperinflation won’t happen again.

Large denomination notes are not the preserve of developing nations, though.

The United States printed high value notes until in 1969 when denominations of US currency over $100 were declared obsolete by executive order of President Nixon, partly due to concerns about their use in organized crime.

The largest denomination bill printed by the US was the $100,000 gold certificate, with a portrait of President Woodrow Wilson.

Atlas Obscura says 42,000 of these were printed in the 1930s for use within the Federal Reserve. They are considered government property and illegal for collectors to own, but one specimen is kept by the Smithsonian.

The European Union currently uses a €500 note but Italy printed a 500,000 lire note until it adopted the single currency.

The worst case of hyperinflation is regarded as being in post-war Hungary. During this period a 100 million billion pengő bill was issued but was still not enough to buy anything of real value.

Hungary introduced its new currency in 1946, the forint, and a famous photograph shows a street sweeper sending very large pengő bills into the sewer.

While many of these high denomination notes were worthless at the time they were in circulation, many have gained in value considerably since.

Collectors are keen to own notes with exceptionally high values because of the novelty of being a paper trillionaire and the absurdity of the professed values.

Ironically, trillion dollar notes which would not buy a bus ticket in Zimbabwe seven years ago are now sometimes selling for hundreds of US dollars around the world.